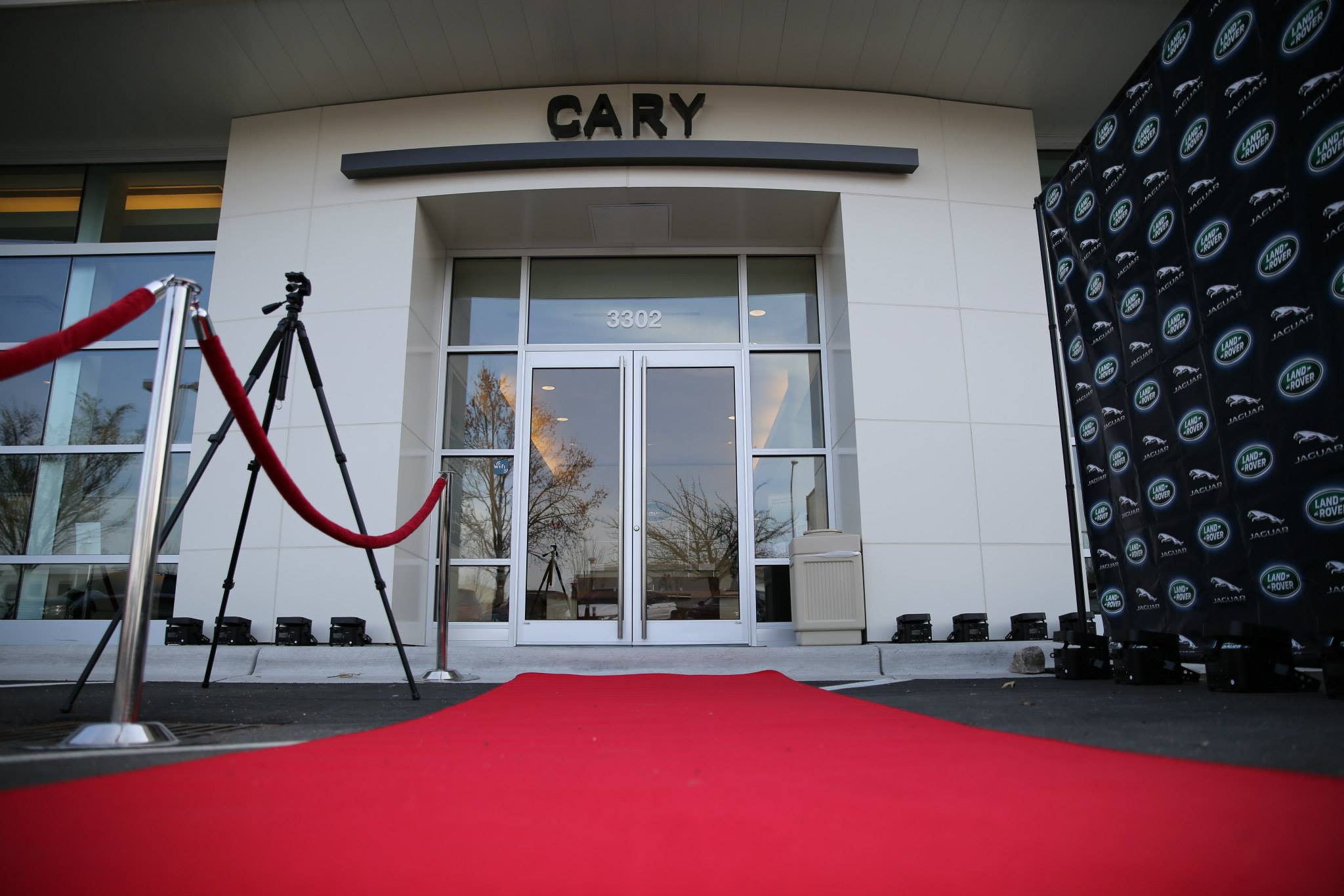 “Where did all these cars come from?”

The question comes from a bearded man who publishes several magazines in the region and has advertised with Jaguar Land Rover in the past. The cars in question? You had to see them to believe them: a fully-restored 1964 Jaguar Mk II, a Range Rover Long-Wheelbase, and four Jaguar E-Types. The E-Types were roped off—though we were able to circumvent the barriers thanks to a friend—but the Mk II was open to people mingling around. It was exactly there that the question was asked, and answered, just as General Manager Marty Stapleton stopped by to say hello.

The classic cars were present for the evening courtesy of Mr. Leith, who was singled out when visiting Jaguar USA executive Christopher Marchand unveiled the new jewel in the old British crown, the Jaguar F-Type Coupe. Mr. Marchand is executive vice president for North American operations, and just the man to introduce the new coupe to the new world—he joined Land Rover USA the same year Land Rover joined the Leith family, 1989, and Leith added Jaguar the following year.

Twenty-five years is a long time for Jaguar Land Rover to get a brand-new facility, but as the evening’s guests saw, the new building is an excellent venue to hobnob about and around some of the brand’s most prestigious vehicles. 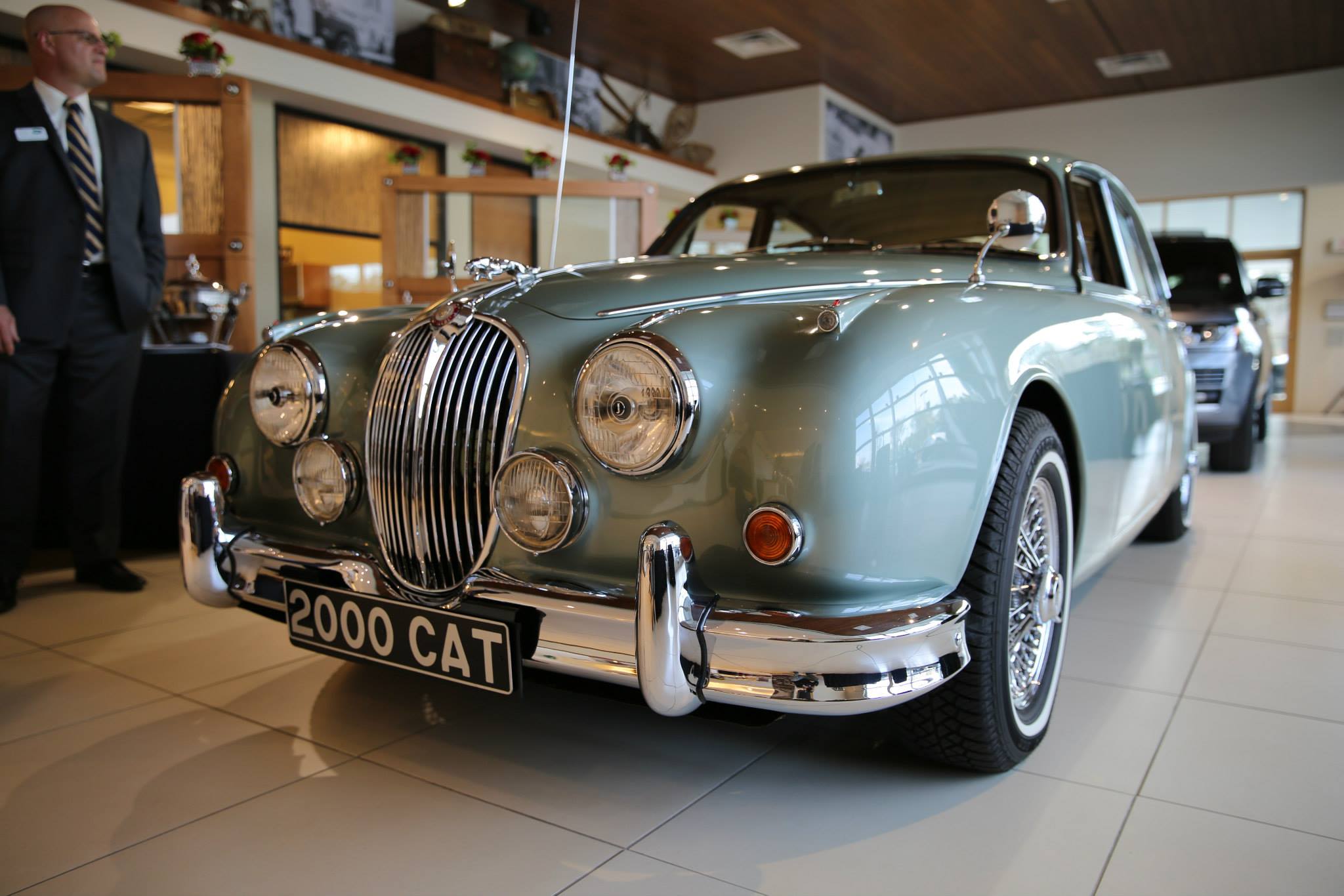 As we approach from Old Raleigh Road, Jaguar Land Rover Cary sits below street level, nestled within the Land Rover driving track. This evening a valet service is present out front, just beyond a red carpet for guests to have their picture taken. Inside the double doors, we are glad to meet Heather, for Heather is there to offer a chilled tray of champagne flutes and welcome us to the party. (We are wowed enough to forget that we can’t win the raffle, but we finish scribbling anyway and drop our card in the box; saving face is important.)

The building divides in two ways—Jaguar section to the left and Land Rover on the right—but unity is maintained in the middle by an open bar. We would find a Riesling here later in the evening—hard to take writer’s notes with two drinks in your hands—but for now we note that the center of the building is where the most important people seem to congregate. The business owners, the executives, the sailboat-on-weekenders and landed gentry likely know of a party rule about staying at the center of things. Writers are not adept at climbing the ladder of social mobility, so we percolate out to the Land Rover side to see what may be seen. 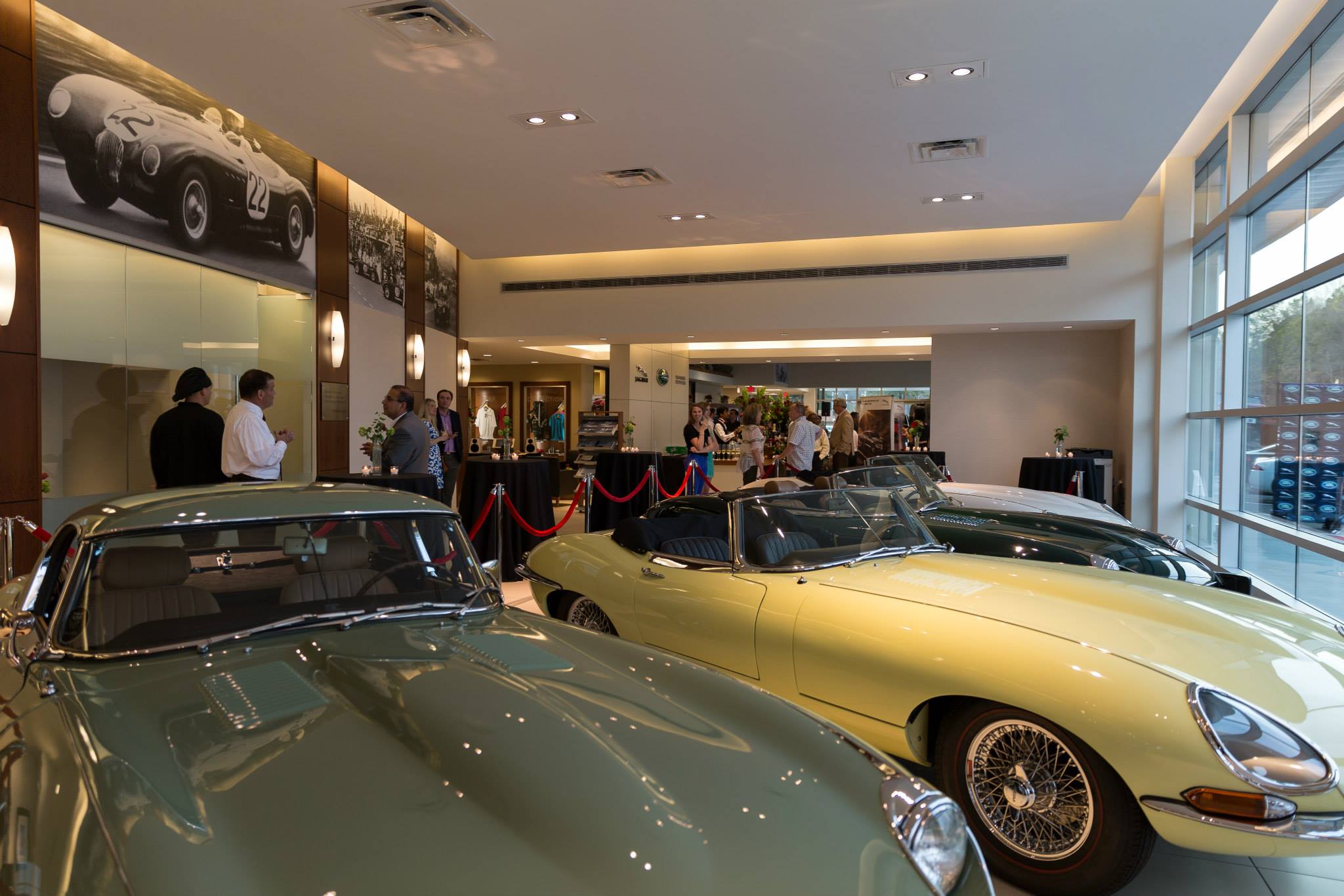 We have chosen wisely. Yorkshire pudding with filet of beef, mini-barbecue sandwiches, fish & chips, hot crab dip, sliced beef wellington, English cheddar and ale, and something called “bubbles and squeak.” We’re still pondering over that one. As we silently bless Sir William Lyons and William Walmsley for starting this company a century ago, we observe the pockets of conversation around us.

A man in a beret talks quietly with a P.R. guy about something we can only assume was casually entertaining. A bespectacled woman in a gown speaks to a vested man about the importance of education. Two old buddies shake hands and make plans to take yoga together at some point—got to stay fit—and a woman in sales is quite pleased with the year she’s had.

We’re pleased, too. The caterer slicing beef calls out to us as we head toward the Jaguar side, and he wants to know how we enjoyed the wellington. Quite well! The Jaguar has its own character of decorations, just as the Land Rover side did. Over here, however, are the E-Types partitioned off, as well as a single vehicle under wraps in the display section. Because we know it will be shown off later, we take a peek at the holding room, a glass enclosure where vehicles sold wait for their owners to pick them up. Behind these crystalline walls lies a Jaguar XKR-S GT, a speed-shattering monster in white. No clue as to who its new owner is, so tonight it’s just a prize beauty, drawing looks and several metric tons of envy. 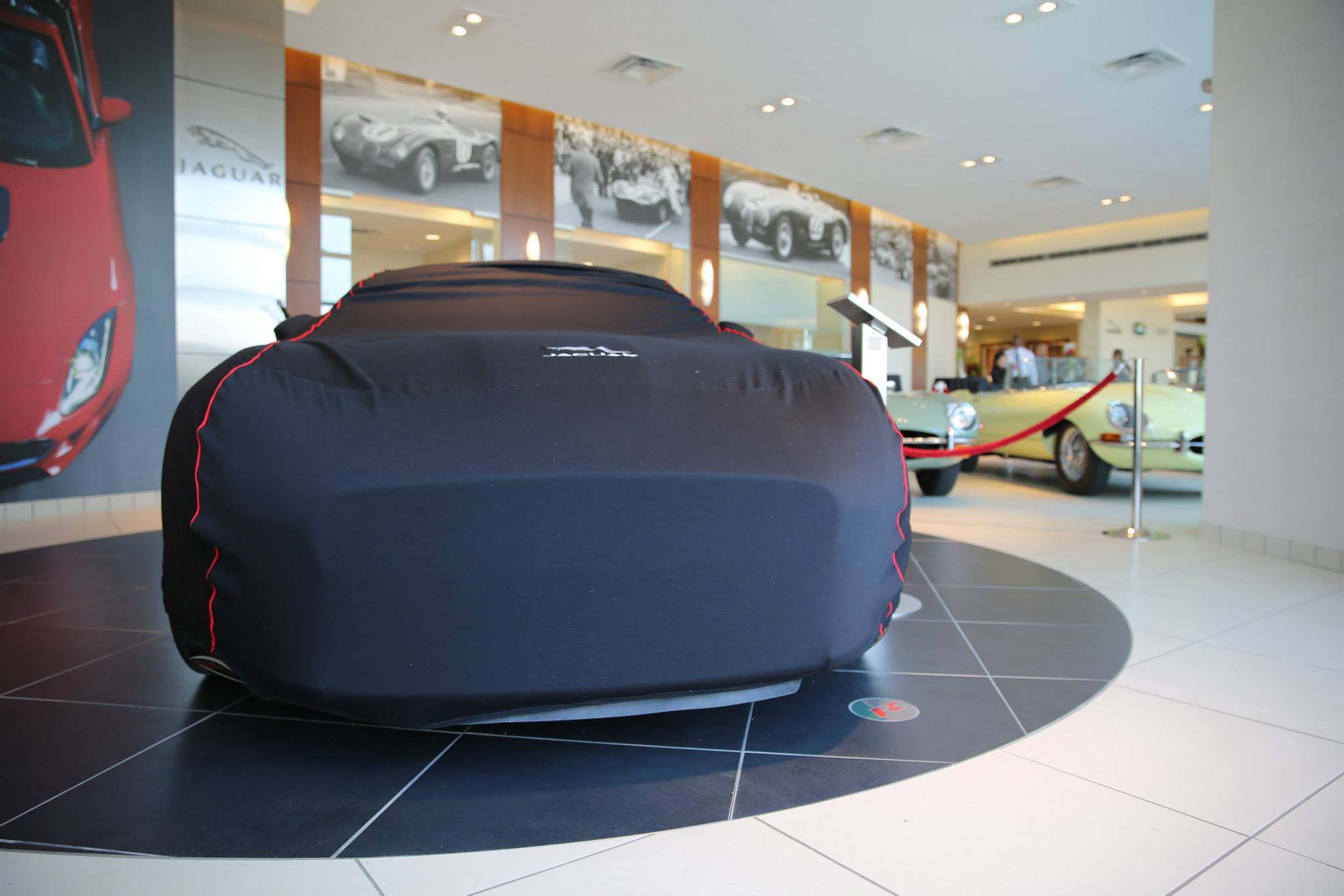 And the E-Types? What can we say about the E-Types? They are automotive legend, the model that Enzo Ferrari called, “the most beautiful car ever made.” This is the car that the show Mad Men chose to typify upper-crust Manhattan in the 1960s. It’s the car Jerry Seinfeld chose to symbolize Sarah Silverman on his show Comedians in Cars Getting Coffee. It’s a car that doesn’t quite fit in today’s world with its curves and impossibly long front hood, which is why we love it so. You’d almost think that you would need four F-Types to equal an E, but this evening Jaguar Land Rover Cary did the reverse.

When Mr. Marchand gave the final command to draw the cover off the F-Type Coupe, it was clear that this was not trying to be anything like the E-Type. Those of you who have seen the convertible F might think this a mere hard-top version. The reality, however, is that the coupe uses a roof so skillfully integrated that it’s hard to imagine a convertible version. The look of the car, particularly from the rear is completely different. Rather than going with the striking Firesand orange popular with the convertible, this F-Type R was a dark gray, and a dark gray was all it needed. 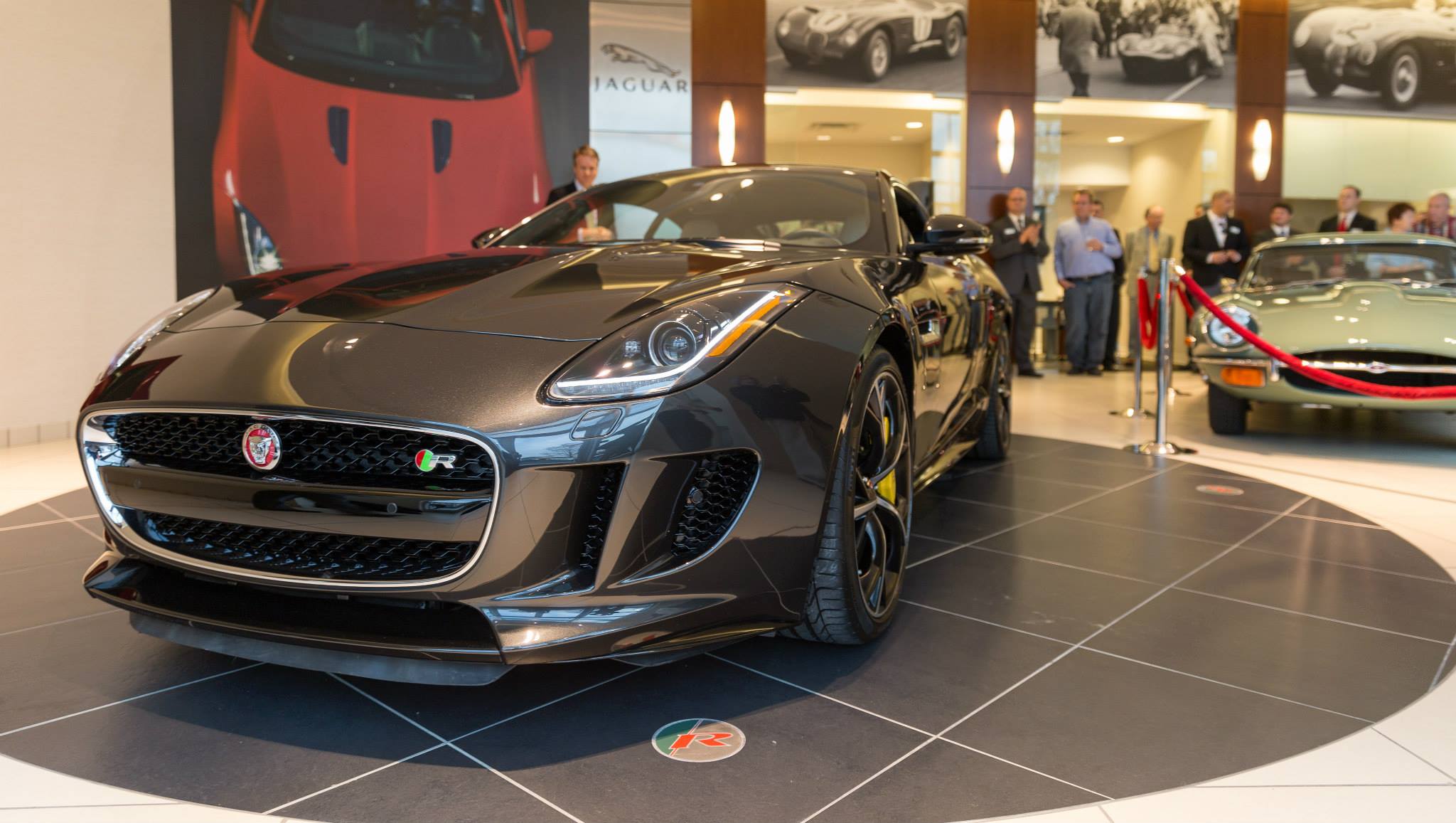 With the F-Type R and a short Riesling accomplished, it was time to observe the one party rule we did know: never be the first to arrive or the last to leave. While we waited for our car, one of the other valets wandered over to the XJ we were admiring.

He was a college kid, and had the toothy grin and low whistle you’d expect at standing in front of a car that costs as much as his undergraduate education.

“Man, I do, maybe one day. Who are all these people?” and he gestured toward those remaining inside.

We thought about that as we drove home.

That Time We Had a Grand Opening Party and Everyone Had Champagne was last modified: May 13th, 2015 by Jaguar Land Rover Cary

Test Drive: The 2014 F-Type Review
“Are You Decent?” The Spring Car Cleaning Tips You’ve Been Waiting For